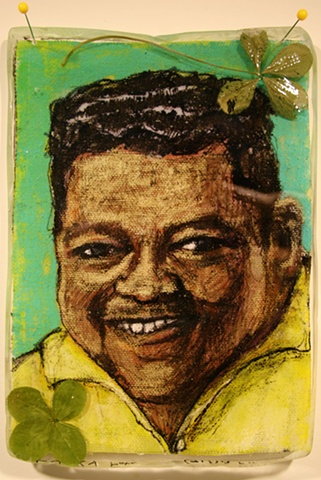 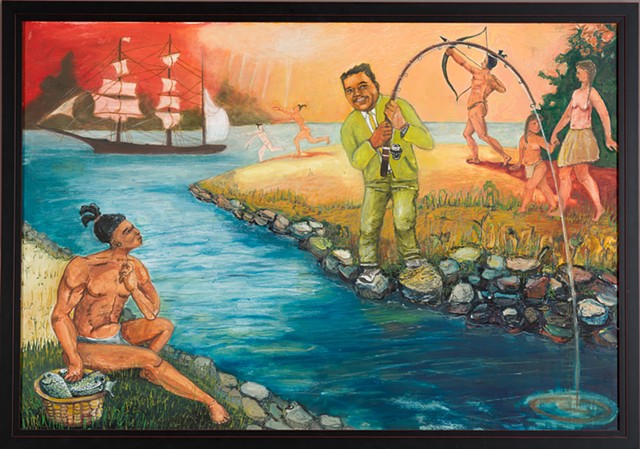 Young Fats Goes Fishing With The Natives
oil on paper 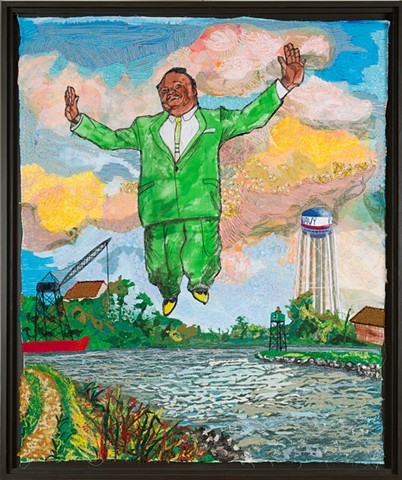 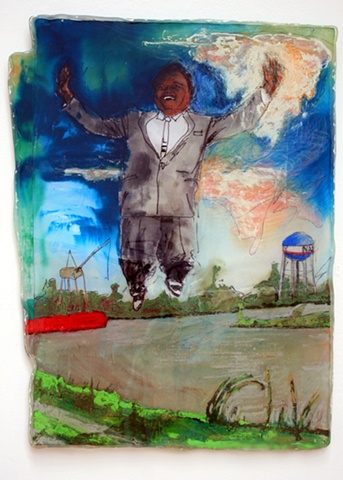 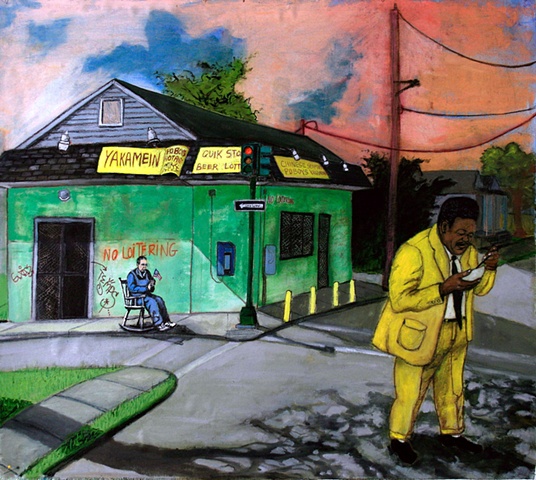 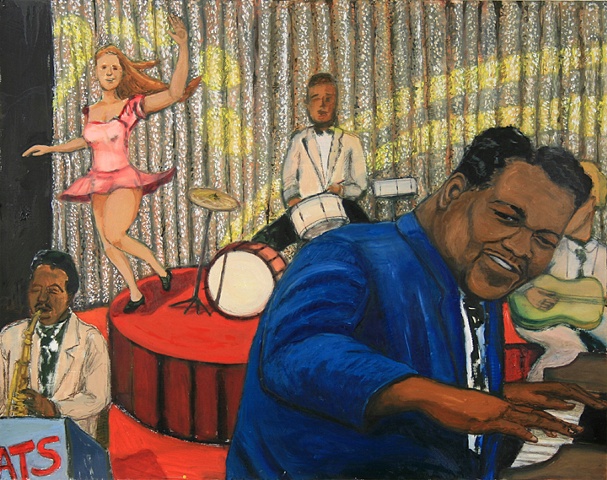 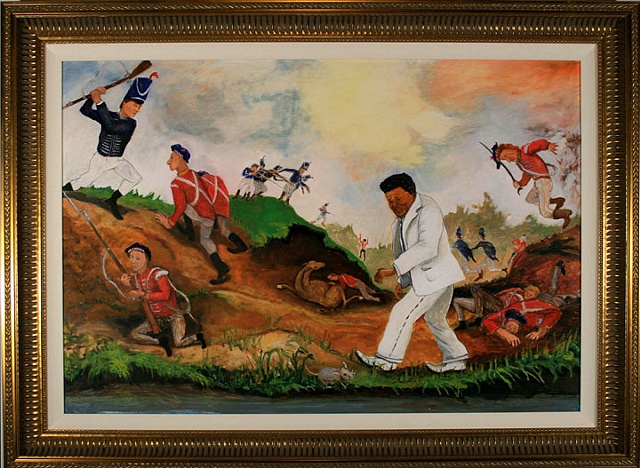 Walking Past The Battle Of New Orleans
oil, colored pencil on paper
32" x 45" 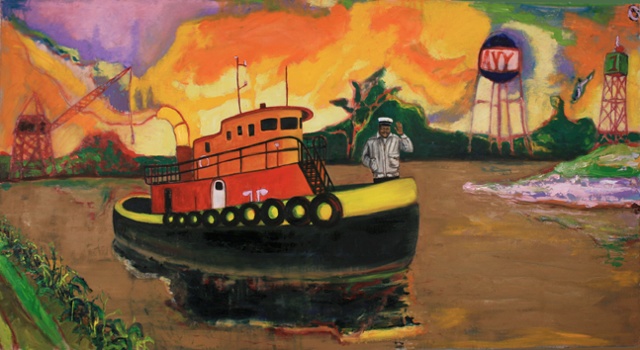 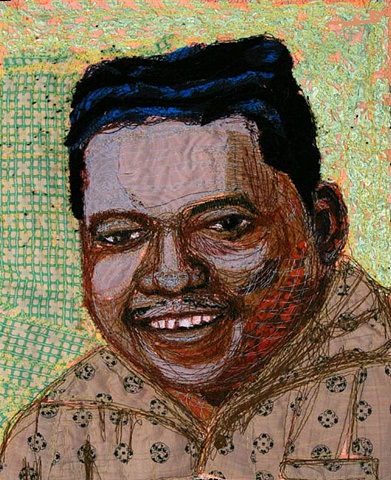 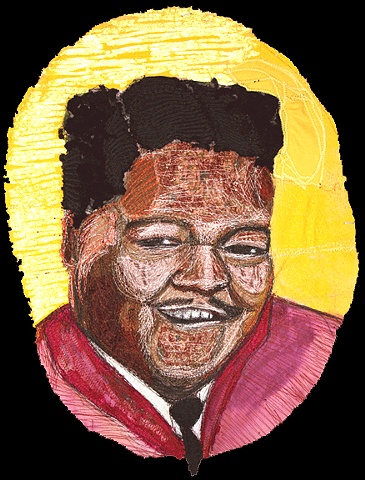 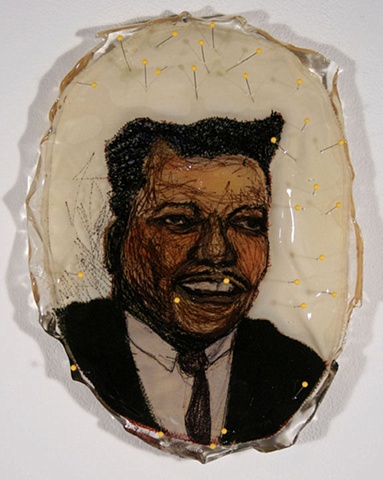 The piece that inspired the Fats Domino Series is called Not Fats. This piece started as a commission commemorating the nine people from New Orleans who have been inducted into the Rock and Roll Hall of Fame. I did nine fabric portraits of all the inductees and incorporated them all into a banner. I scrapped the first version of Fats, because I felt I hadn’t gotten his likeness quite right…so I made another, and the second one is the one that made it on the banner. Late last year, I started experimenting with incorporating resin into some of my pieces. I still had the rejected Fats hanging around in my studio, so I used him as a guinea pig for the resin. I created a little dam out of plastic around the fabric portrait and proceeded to pour a lot of resin on top. At first it seemed it was working great, then after the resin started to set up, the fabric began to float to the top of the resin and rise above the surface…which I didn’t want. I wanted the fabric to be completely embedded in the resin. So I frantically started sticking pins into the fabric to keep it down. I intended to pull out the pins before the resin set up, but I missed my window of opportunity and the pins were a permanent addition. Well, the pins were one of those “happy mistakes” that artists talk about. This mistake inspired me to make a whole new series about Fats Domino. The addition of the pins gave the piece a whole new meaning. The pins are mostly stuck in Fats’ face and it made him seem afflicted and vulnerable. I started thinking about what happened to him after Katrina…how he had to be rescued from his house, like so many of my neighbors here in the Lower Ninth Ward. Many people thought he had died in the storm. Like so many others, he hasn’t moved back to his neighborhood since the storm. So, I titled that first piece Not Fats…because we hoped the best for him and couldn’t believe his misfortune and we were relieved to hear he was still alive. After that first piece, I started depicting Fats in many different situations in which he transcends time and space. He’s taken on a semi-mythical/heroic stature. He fishes with the Natives. He floats above the Industrial Canal. He’s captain of his own ship. He walks through the Battle of New Orleans, unscathed. In Facing Leaner Times Ahead, Fats Nourishes Himself With A Bowl Of Yakamein, he is galvanized by a concoction that is particular to his home place. We saw ourselves in Fats when he had to be rescued from his house after Katrina. We felt sorry for him and ourselves to have been put in such a vulnerable position in life, and for many it’s been a very bitter experience. So I wanted to restore Fats’ power. In this new body of work, Fats transcends adversity and becomes a Lower Ninth Ward hero.