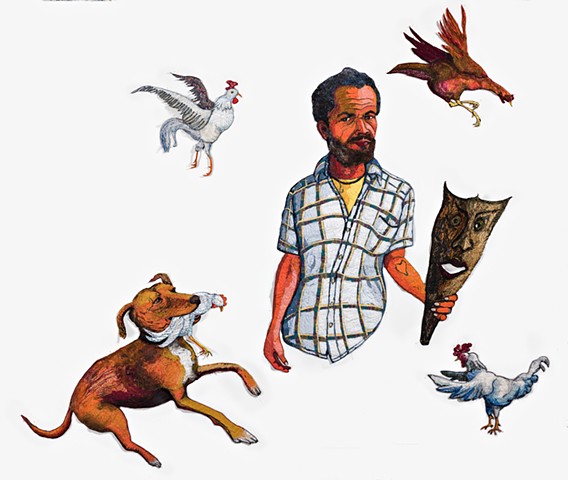 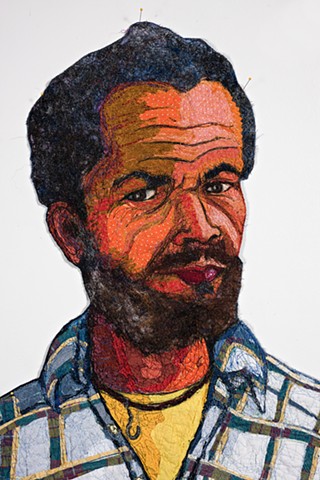 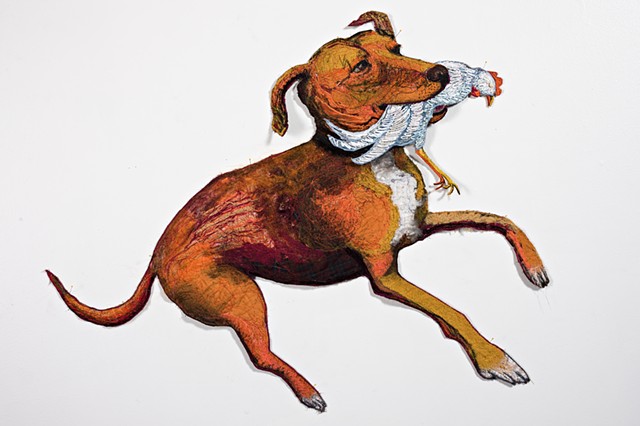 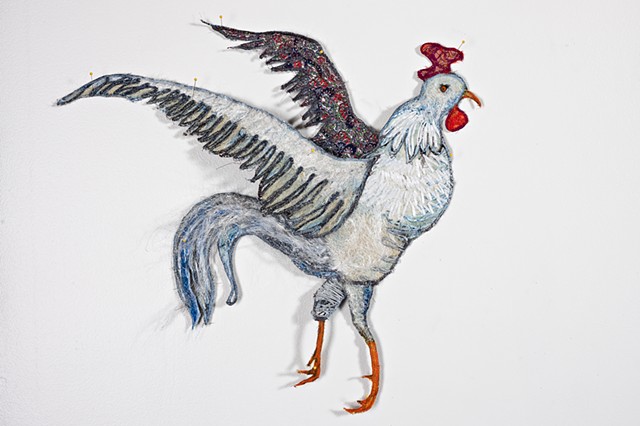 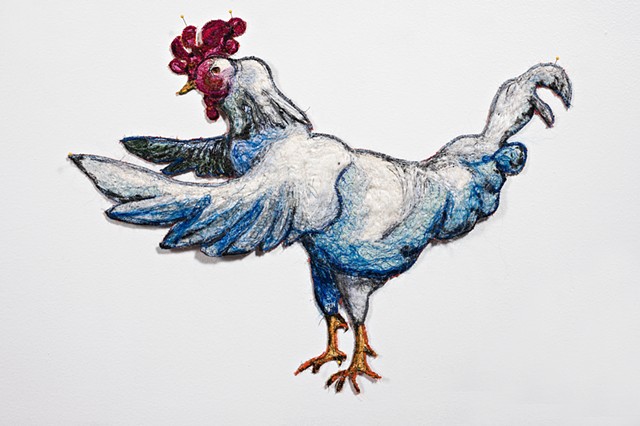 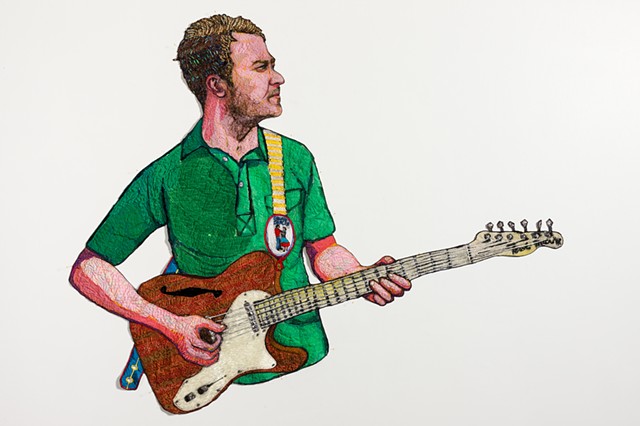 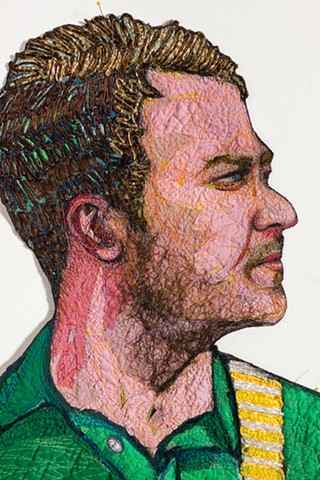 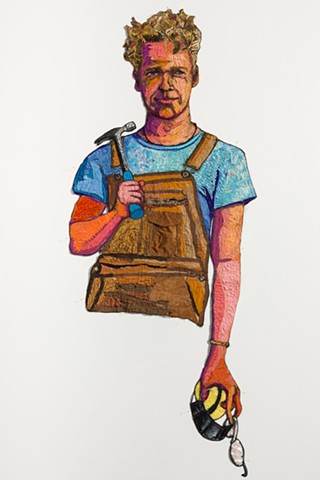 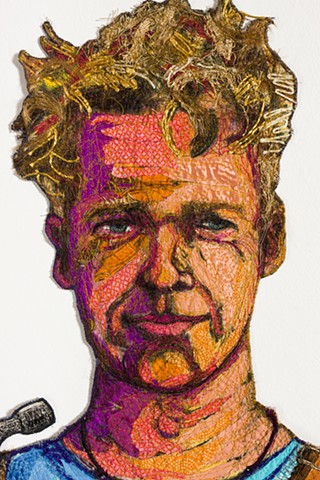 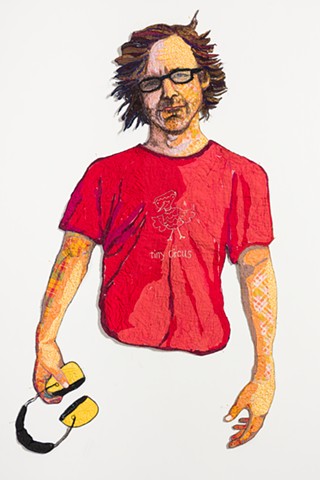 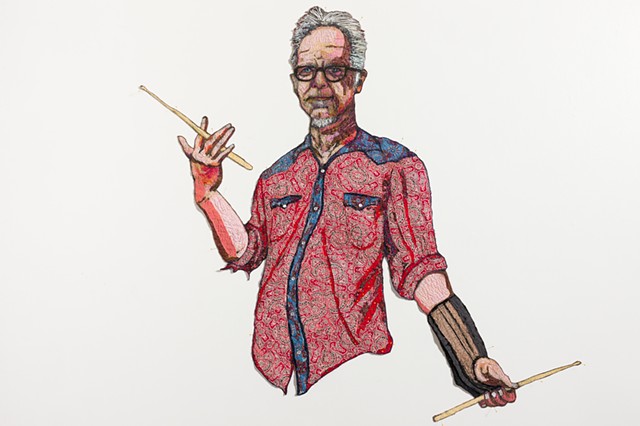 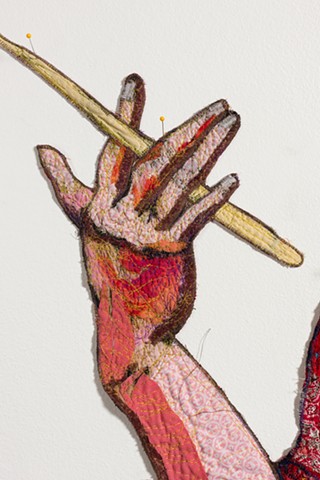 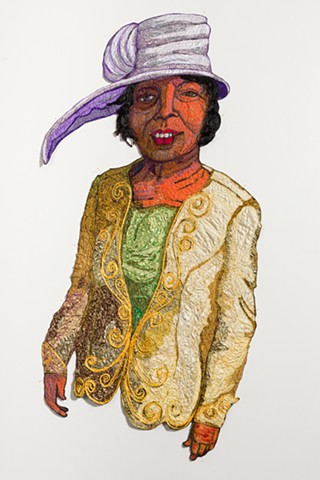 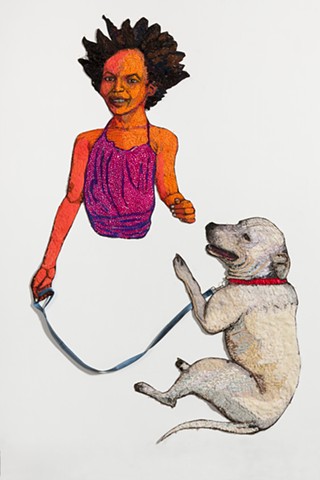 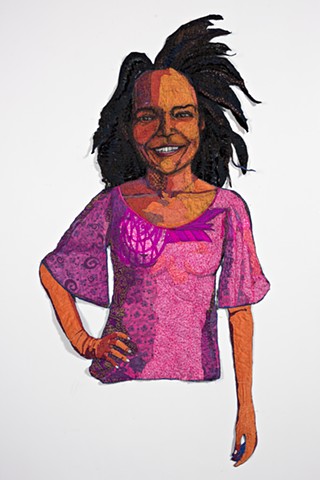 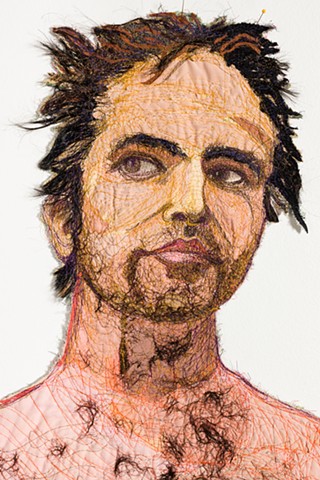 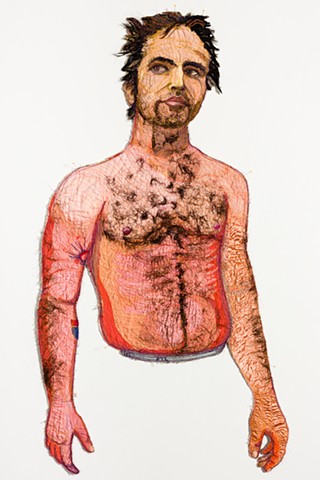 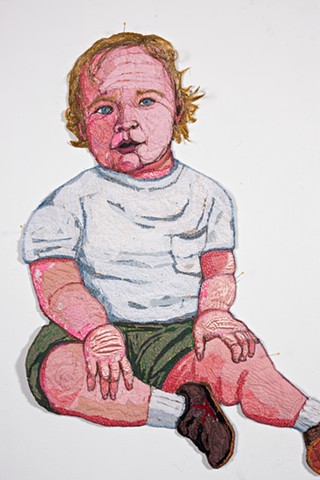 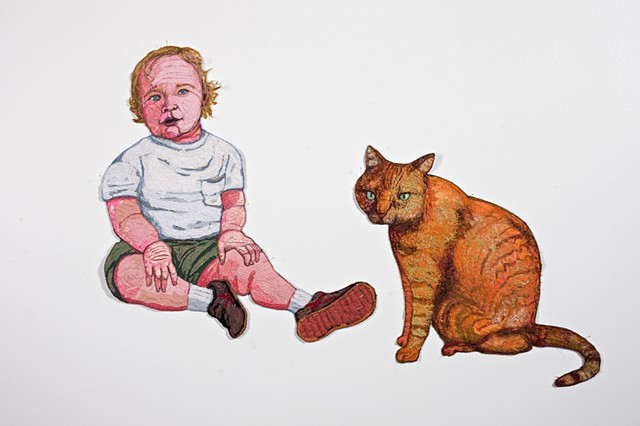 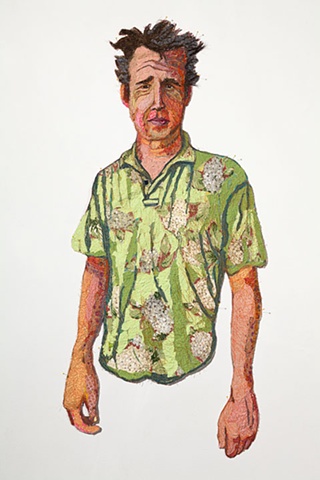 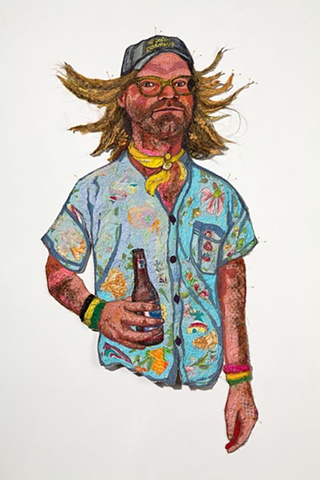 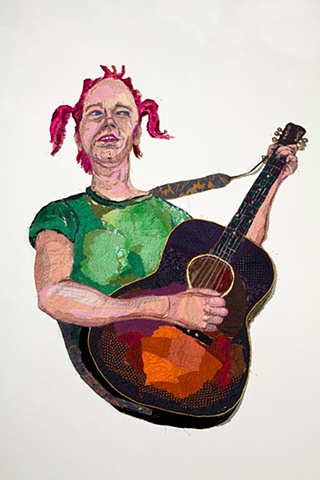 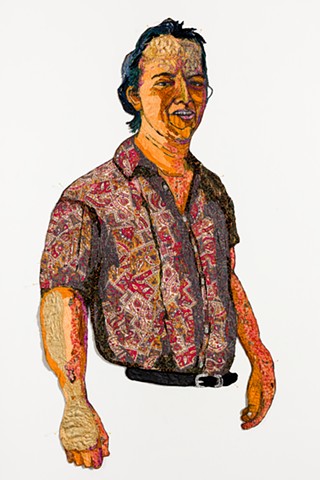 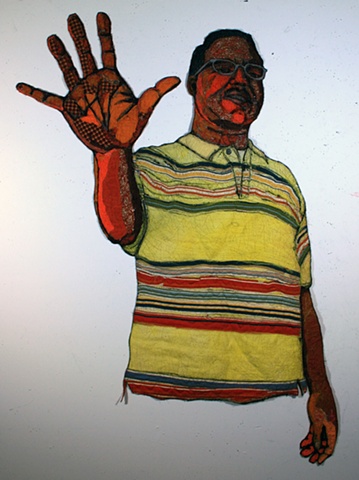 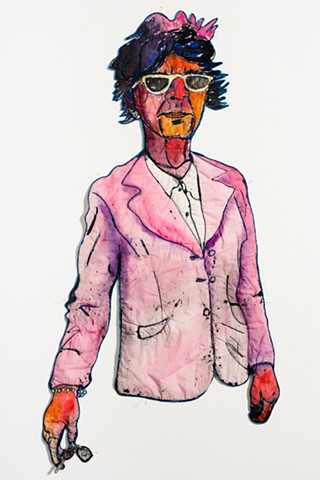 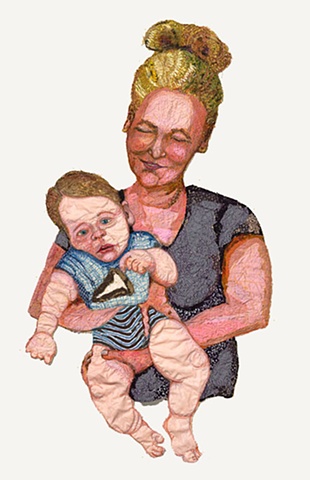 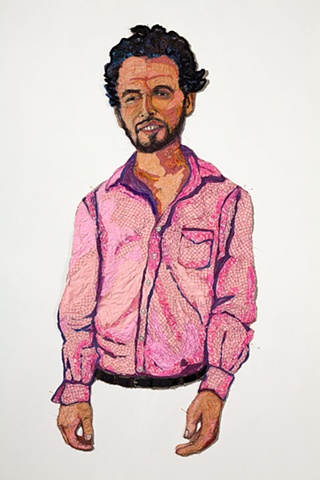 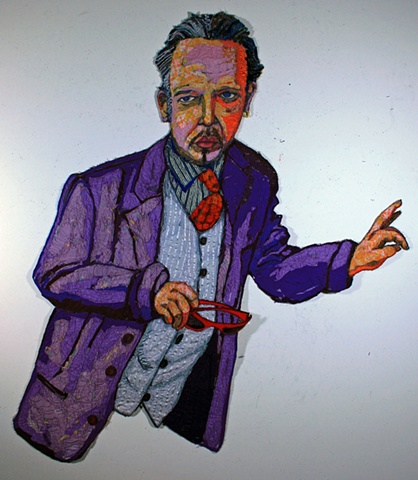 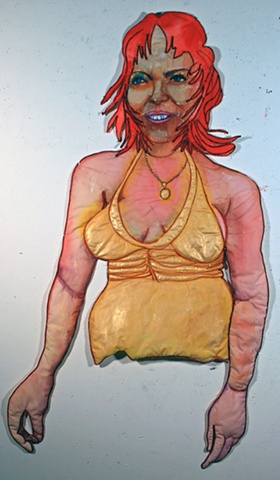 The first portrait I made in this format was a mistake. It was 1997, shortly after finishing my grad work at Tulane University. I was experimenting with liquid latex (natural rubber), having been inspired by some of the work of Eva Hesse. I had only started using fabric as a primary medium in my work the last year of grad school and I was using the latex as glue in a collage-like process with cut-out bits of fabric.

I’ve always been on the lookout for interesting faces to use in my work and I keep a large collection of other people’s family photos as reference. I was making a piece based on a black and white photo of a man in his late 50’s who was shirtless and was staring intently back at the viewer. The distinct tan lines of a “wife beater” undershirt were clearly visible on his torso. I started the piece by drawing his slightly larger than life size figure on a piece of burnt orange Naugahyde. I started collaging into the drawing with cut-out shapes of skin-toned, gauzy fabrics and I was using the latex as glue to keep it all together. At the end of one work day, I had completed the figure down to the waist, including the arms and hands which hung slightly below the waist line. I came back the next day to finish the lower portion of the man’s figure, and I was disappointed to find that the collaged elements were curling up around the edges. It was clear that the latex was not going to stick to the vinyl background, so I peeled off the piece from its background, at first thinking the piece may be ruined. The whole thing peeled off something like a Fruit Rollup and at that moment I realized that the half-finished piece was actually more powerful and dynamic than the piece I originally envisioned. I titled the piece Tank, inspired by the tan lines and his steely demeanor. There was poignancy in the dichotomy of his fierce stare and his truncated form which imparted an air of vulnerability. After this first piece, I completed a whole series of “cut-out” portraits.

Since then, I periodically revisit this cut-out format in fabric portraiture. My methods have evolved over the years and my fabric work is becoming more and more “painterly”. All the portraits in this show are people I know…mostly my neighbors in the Lower Ninth Ward neighborhood of New Orleans. I begin by photographing the subject multiple times. Then I sketch from the photos, sometimes combining elements of several photos into one sketch. After the sketch is complete, I retrace the drawing onto a transparency and blow up the figure using an overhead projector and then I redraw it on a piece of plain muslin. At this point, I use watered down acrylics and complete an underpainting. After the underpainting is dry, I load the piece onto a longarm quilting machine and begin the process of appliquéing various combinations of fabric, thread, yarn and hair onto the portrait. I use the underpainting as my guide for form, light and shadow, and color choices. I use the longarm quilting machine as a free-motion, thread-drawing machine.

After filling out the figure with fabric and thread, I cut it out of its background and pin it to the wall. To a certain extent, these pieces call to mind the portraiture of Alice Neel…she’s definitely one of my influences and I look to her for guidance in color choice and line sensibility. The resulting cut-out figure emanates a strong presence.