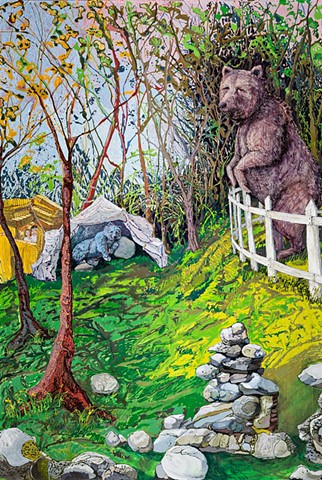 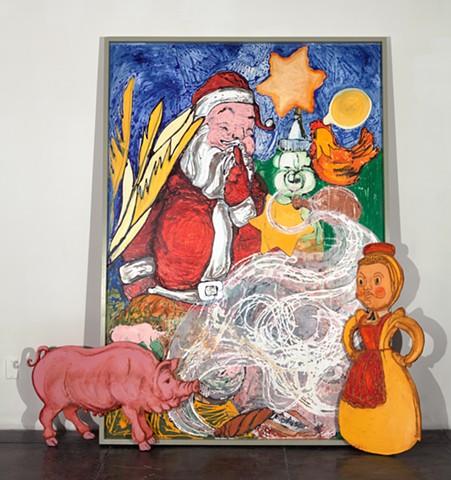 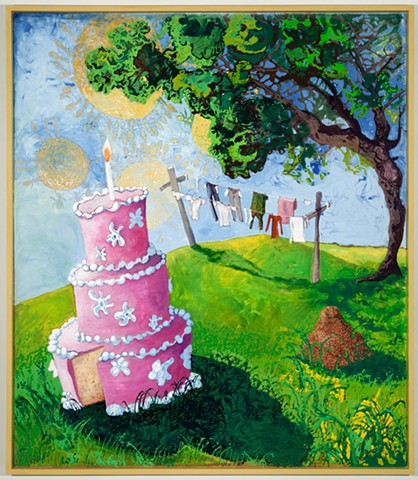 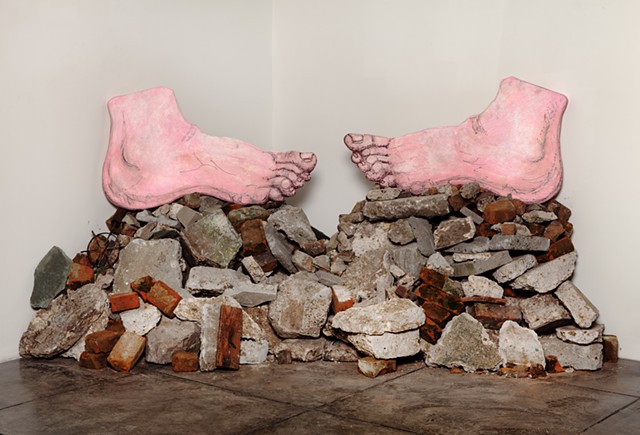 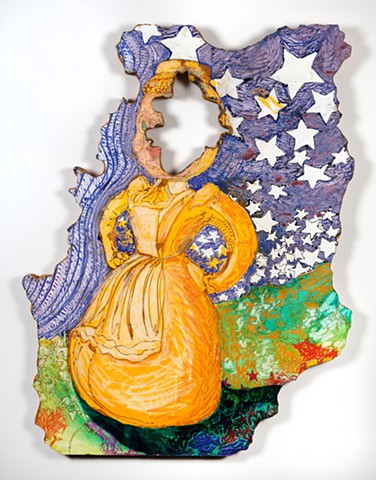 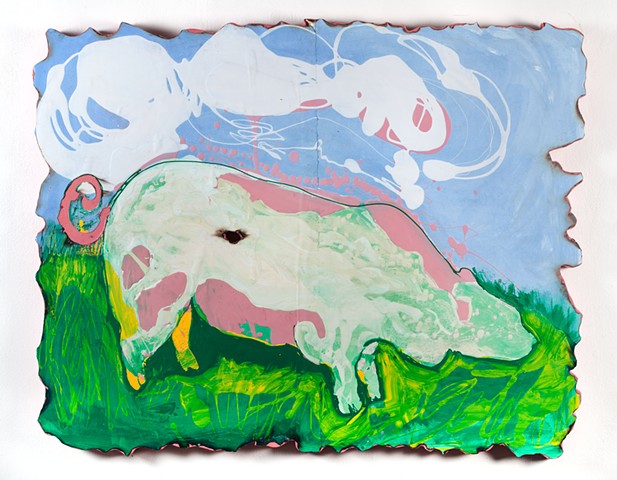 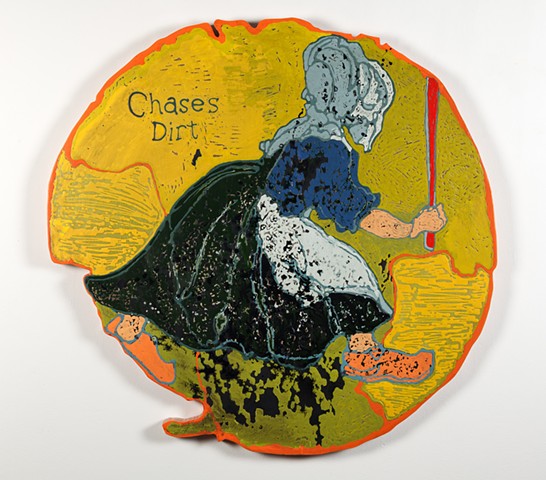 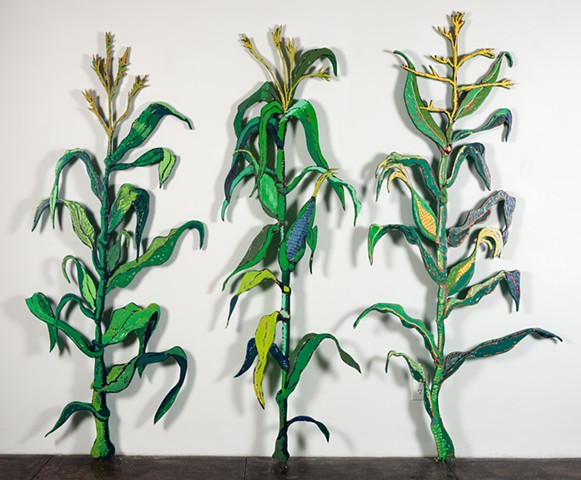 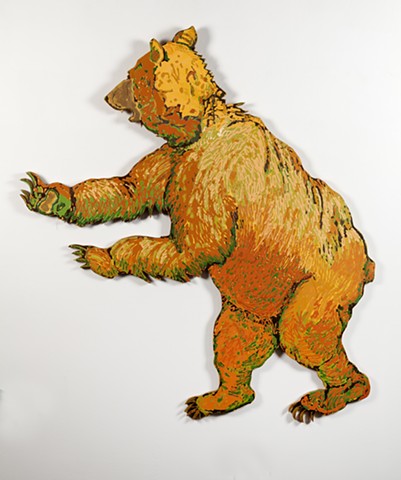 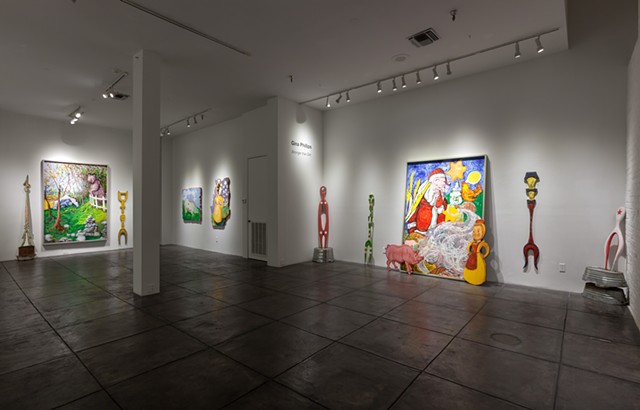 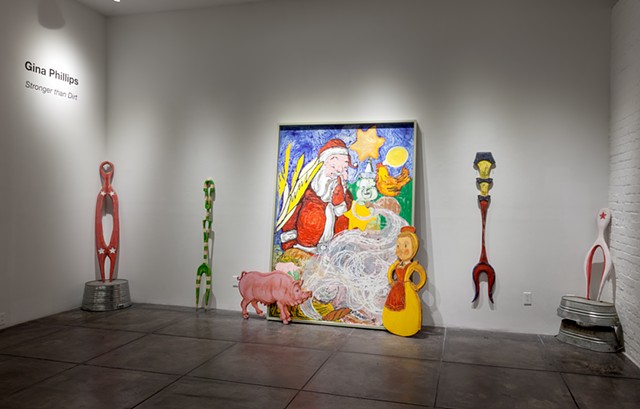 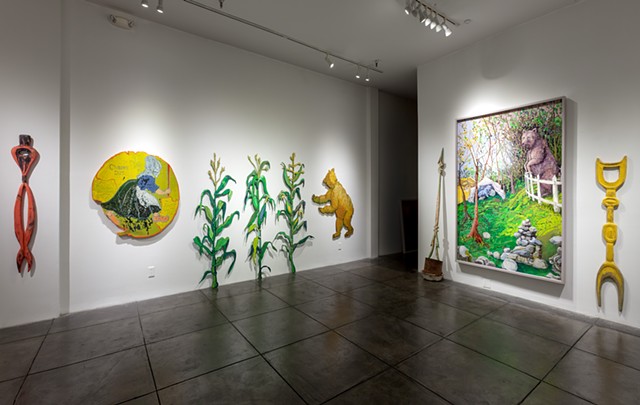 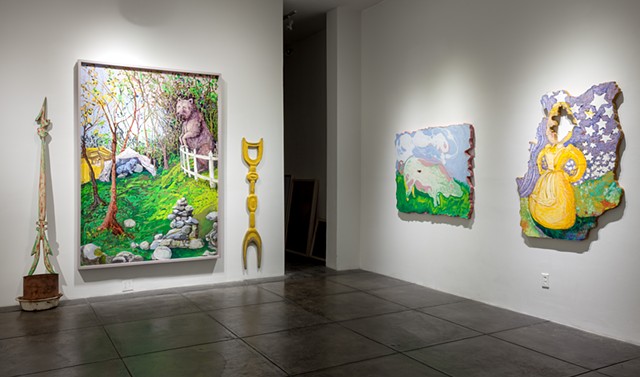 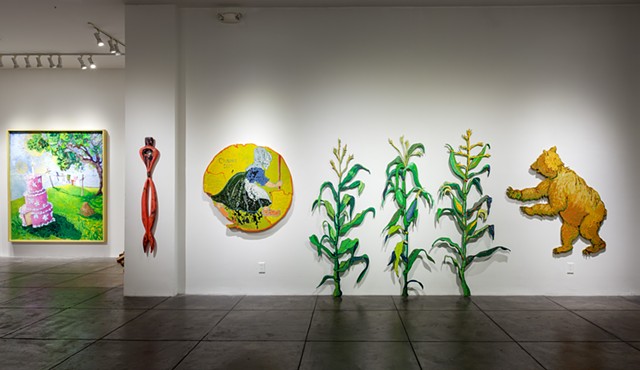 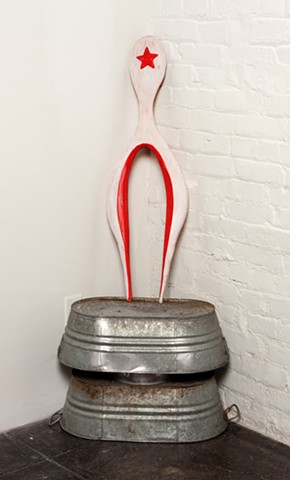 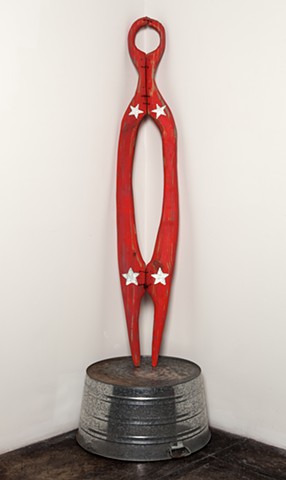 I ruminated on Stronger Than Dirt* for a couple of months before making the first painting. I typically follow this kind of cycle: super-production mode, installation, opening reception followed by post-partum weirdness and then the rumination phase. After the show is up, I often tell myself I’m going to skip the down time and keep up the high energy and long studio hours. But I’ve come to realize that, ultimately, this cycle is an integral part of the work. I find that, in all my work, even when it may not be obvious to the viewer, one body of work leads to the next. There is always a continuation of, or a reaction to, the last show. The show before Stronger Than Dirt was intensely self-reflective, a 20 year retrospective of work that culminated with a very large, self-portrait made of painted and sewn fabric. I knew that, for my next show, I needed to change up my working methods and imagery. I wanted to see what would happen by simply beginning with a juxtaposition of stream-of-consciousness imagery.

In the months prior to beginning work on the show, I daydreamed about a lot of different kinds of imagery, forms, materials, and techniques. Bears, cakes, ants, and the colors yellow & pink were some of the thing swirling around in my head during this formative phase. At first, all these things seemed too incongruous, but ultimately, all are prominently featured in this new work.

I began searching for a narrative by experimenting with photocopying toys and small objects that were lying around in my studio. I enjoyed playing around with the juxtaposition of the objects and the pictures resulting with strange auras and short depth of field. I also knew I wanted to focus on painting and sculpture while taking a break from working with fabric. I began my art career as a painter, and as I shifted my focus to making work with fabric, nineteen years ago, I would characterize my work as “painting” with fabric and “drawing” with thread. It’s been so long now that I have focused on the techniques I developed with fabric, that, at first, it took me a while to find my bearings with paint. The interesting thing is, the painting technique I developed using squirt bottles, looks a lot like the stitching I use in my fabric work. The relationship between fabric and paint has come full circle. It’s also been a while since I've made 3 dimensional work. The sculpted wood pieces are something entirely new for me. Overseer is the first painting in this body of work and it came out of this experimentation with using photocopied objects as a reference. It’s been a while since I’ve made paintings in a picture-plane format. For quite a while now, I’ve been making cut-out fabric forms. There is something about painting within the confines of a picture plane that sucks you into some kind of little self-contained world. While working on this piece, I felt that it needed something more. I didn’t want to cover over the forms I had already painted, so it occurred to me to make the two cut-out figures in the foreground to complete the composition as well as enrich the narrative.

I love the range of expression in all the characters within this painting. Santa’s squinty eyes seem to express a mischievous air while Little Yellow Miss has a wide-eyed look of consternation. The Pig seems resigned to its fate of servitude, while Honey Bear looks on as Santa’s impish side-kick. As I worked on this painting, I began to see the meaning of this painting having to do with hierarchy of control. Santa is like a mythological, Greek-type god, looking down and meddling with the mortals from the heavens above. Little Yellow Miss appears as if she’s been stricken with some kind of obsessiveness by Santa and is in turn, enforcing her will on her lowly subject, the Pig.

Little Yellow Miss is a name I gave the vintage plastic figure I found at my friend’s house when I was looking around for more toys and small objects to use as reference in this new body of work. Neither one of us was quite sure about the original use for the figure. She looked like she might be some kind of condiment dispenser from the 50’s because her hat was a lid with little holes poked in the top. After doing some research, I discovered she’s actually a vintage laundry sprinkler. Her hands-on-hips stance and wide-eyed stare is all about her dedication to cleanliness and order. Discovering this dynamic set the tone for the rest of the work for Stronger Than Dirt.

The counterpart to Little Yellow Miss is the Old Dutch Girl, the icon for Old Dutch Cleanser. She’s depicted as an Old World woman wielding a stick in a combative stance as she “Chases Dirt”. Coincidentally, the studio I’m working in used to be a corner store, and the transom window features four deteriorating Old Dutch Cleanser decals. I used the decaying decals as reference for Chases Dirt. In this piece, The Old Dutch Girl engages in a futile act for control as she appears to be created from, or disintegrating in to, the very thing she’s battling against.

Poised to aid in the battle is a collection of sculpted and painted wooden laundry sticks. These sculptures are colorful, oversized versions of vintage laundry sticks which were forked implements used for stirring and transferring laundry from one tub to another in the days before washing machines. In the story of Stronger Than Dirt, each stick may be a pawn or a character, with its own personality, defined by its form, color and design.

In Thicket, the Honey Bear has come to life. Maybe he decided to descend from the heavens to live with the mortals, a’ la the angel in Wim Wenders’ Wings of Desire. A mysterious cairn occupies the foreground. In the background, there are two dwellings, a blanket fort and a cushion fort; one is occupied by a hibernating bear, while the other is occupied by a couple of mischievous kids. A large, somber bear in the middle ground is standing behind a fence. It’s unclear if the fence is a form of protection and who is being protected from whom. There’s a strangely enacted control over environment in this piece and, ultimately, it’s about the dichotomy of civilized and savage forces.

The cycle-of-life narrative in Birthday is related to this struggle as well. A huge cake looms over a landscape. It feels more like architecture than a baked good. There is an implied change of the seasons as the sky is filled with four mandala-like orbs that radiate with suckling ants. On the ground, the ants have created their own organic form of architecture. One piece of cake has been neatly dismantled, whisked through underground tunnels, and reformed as a mound on the surface of the grass.

Lastly, Heap Dwellers, embodies the human need to control, to conquer and, in a more positive light, the noble human struggle against adversity. Two oversized feet face each other from the tops of their respective heaps of rubble. It appears, in this instance, they are stronger than dirt. * “Stronger Than Dirt!” was the original slogan for Ajax cleaning powder.